News From Around the Village

Lasell Village gets a shout-out in AARP’s recent article profiling the growing trend of continuous care retirement communities on or affiliated with university campuses.  The piece describes the many benefit of an active senior lifestyle where residents engage in lifelong learning and growth, from taking classes to attending campus cultural and sporting events.  Read it here.

Village Gets Another “A” from Fitch 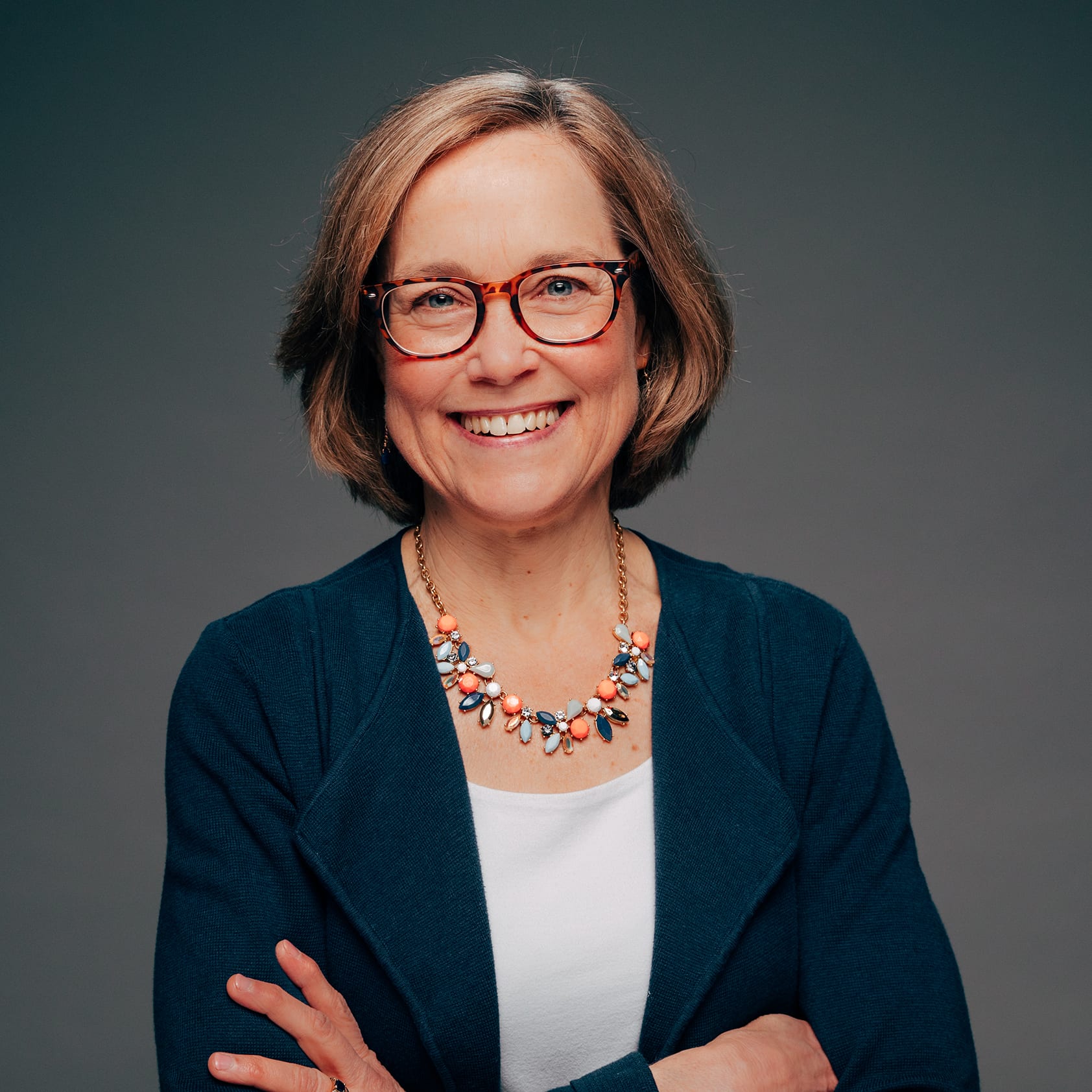 In a heartfelt letter to the Lasell Village community, President Anne Doyle announced that she is resigning her position after seven successful years of leadership. Her last day will be October 28. Doyle’s short-term plans focus on pursuing her athletic passions: embarking on a wilderness canoe expedition in Canada, and undertaking a 1,000-mile cycling adventure in the British Isles.  “My next professional steps will continue to shake up outmoded stereotypes about aging,” she writes.

During her tenure as President, Lasell Village was named three times as one of Boston’s Top Women-Led businesses. Doyle became a sought-after presence in the Age-Friendly community movement, quoted in media from the Boston Globe to The New Yorker magazine. The latter noted her exceptional track record of leading a CCRC during the COVID pandemic. She has been a guest panelist on a number of webinars related to lifelong learning, including the global 2021 World Aging Festival, and a featured interviewee on the PBS series “getting.dot older.”

Closer to our hearts, Anne was an engaged and interactive presence at Lasell Village. Her warmth and and enthusiasm were evident throughout our community. Modeling courage in our initial COVID vaccine clinic, celebrating our 20th anniversary masked-but-smiling, joining residents for meals or milestone birthdays, dancing at “Prom,” or marching with us at “Pride”—not to mention daily friendly conversations in our hallways—Anne consistently communicated her commitment to and love for the Lasell Village community.

Anne will work closely with Lasell University President Michael Alexander and Jeffrey Simon, Village Board Chair, to develop plans for interim management and an executive search for Lasell Village’s next leader, a process that will include representation from the Village community.  Signing her letter “With gratitude,” she writes: “This community and our friendships will always hold a special place in my heart.” We are so proud of Lasell Village’s own Elly Pollan, who on May 14 was awarded her associate’s degree at Lasell University’s commencement ceremony. Pollan’s achievement was covered in the Boston Globe, describing how how her lifelong commitment to education, often interrupted by the typical demands of family and professional life, came to full fruition here at Lasell Village. Ms. Pollan was drawn to our community because of the focus on lifelong learning, the Globe writes, studying sculpture, painting, literature, and more, as she fulfilled our requirement of 450 hours of annual educational activities.

“I came here because that is what I was interested in — I wanted to continue my education,” Pollan said. “It’s wonderful, actually. It keeps you alive, and keeps you interested.” 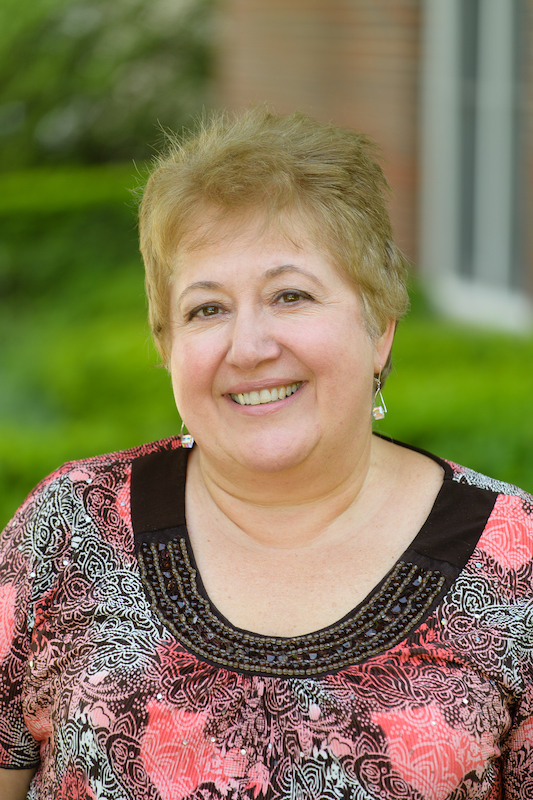 Carla devoted her career to improving the lives of nursing facility residents through creative and innovative activities, and most recently served as the Activity Director at Lasell Village prior to her retirement. She also served on the Board of Directors of MassCAP for many years including several years as President. Congratulations to Carla on this well-deserved honor! 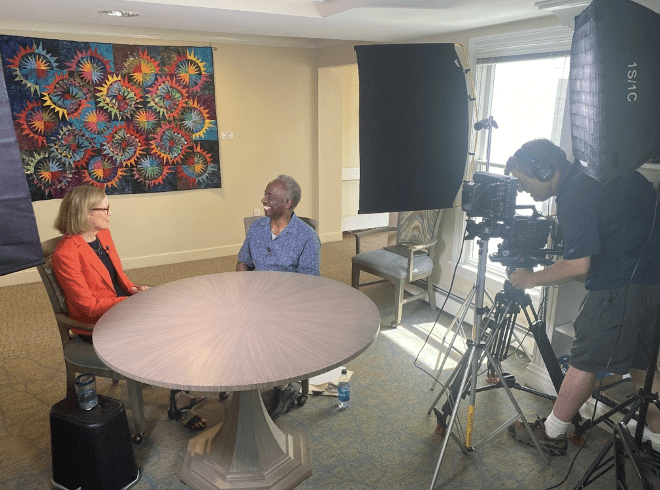 This program highlights “intimate revelations about aging from diverse baby boomers.” Anne is featured as a guest expert in episodes 3 and 12 , discussing opportunities to think differently about aging, including intergenerational living and learning.

Details how to stream the series are here. 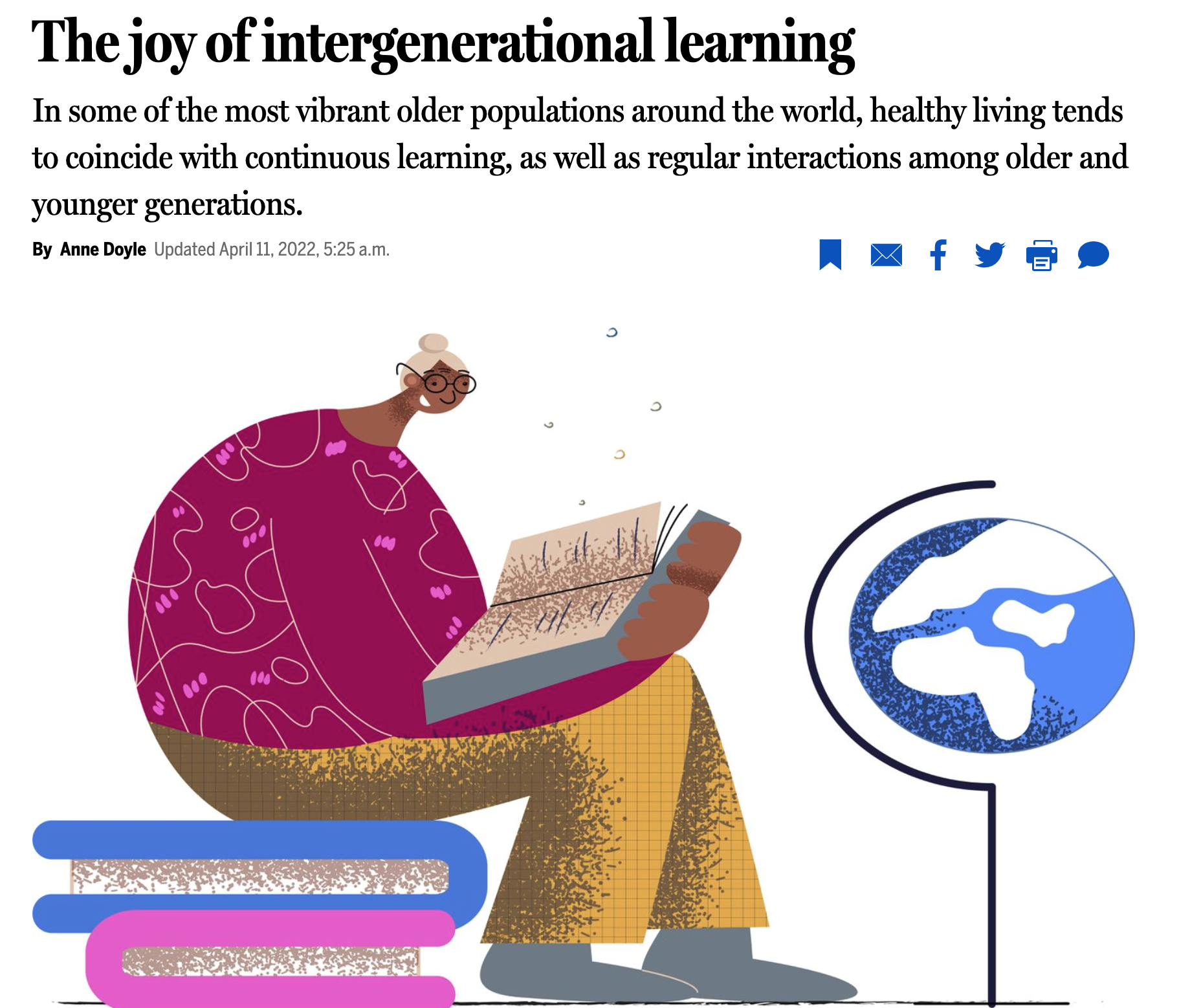 Village President Doyle Op-Ed in the Boston Globe: The Joy of Intergenerational Learning

Read Lasell Village President Anne Doyle’s opinion piece in the Boston Globe. Doyle shares insights on the joy of lifelong learning from her professional experiences at Lasell Village and around the world. As Anne states in the article, “Aging well means rejecting stereotypes about what it means to grow old.  It means looking locally as well as globally for new models. It means integrating intergenerational living and learning models into senior living design to spark innovation and to create a sense of purpose.  It means looking forward with a sense of possibility.” This philosophy guides our culture of engagement at Lasell Village.  Anne quotes one of our residents whose outlook reflects this spirit, noting that at Lasell Village, “we embrace opportunities to redefine, reinvent, reimagine…to make every new transition rewarding.”  As Anne says: “That’s advice to live by, at any age.” Globe subscribers click here to read.

Life Plan CEOS Talk About Staffing and Their 2022 Priorities

Love and Company, a national senior living marketing firm, recently interviewed four CEO’s of leading continuing care retirement communities for their thoughts about caring for staff in the challenging hiring environment created by COVID.  Lasell Village President Anne Doyle spoke about the unique culture of caring Lasell Village cultivates between staff and residents, with an emphasis on the well-being of the community as a whole.  A few highlights from Doyle during their discussion:

“It’s really a connected circle. You have to treat staff well to serve residents well. You need to build a mutual understanding and appreciation between staff and residents. This isn’t something that’s new as a result of COVID. It should be that way all the time.”

President Doyle pointed to Lasell Village’s successful efforts to achieve a 100% staff vaccination rate as evidence that emphasizing relationships between and among staff and residents builds community and benefits everyone:

“We were the first senior living community in Massachusetts to mandate vaccines for all staff members. We lost three CNAs, but everyone else was, ‘Thank you, thank you, thank you.’”  Doyle continues:  “The real foundation for this success began at the start of the pandemic. At Lasell Village, we have worked hard to build a culture of caring: people caring about themselves, their neighbors, their clients. So when the pandemic began in the spring of 2020, we talked a lot about caring for our neighbors, and that everyone needed to depend on each other to make good choices.”

March 2022: Seven Habits that Lead to Happiness in Old Age

The Atlantic:  Seven Habits that Lead to Happiness in Old Age 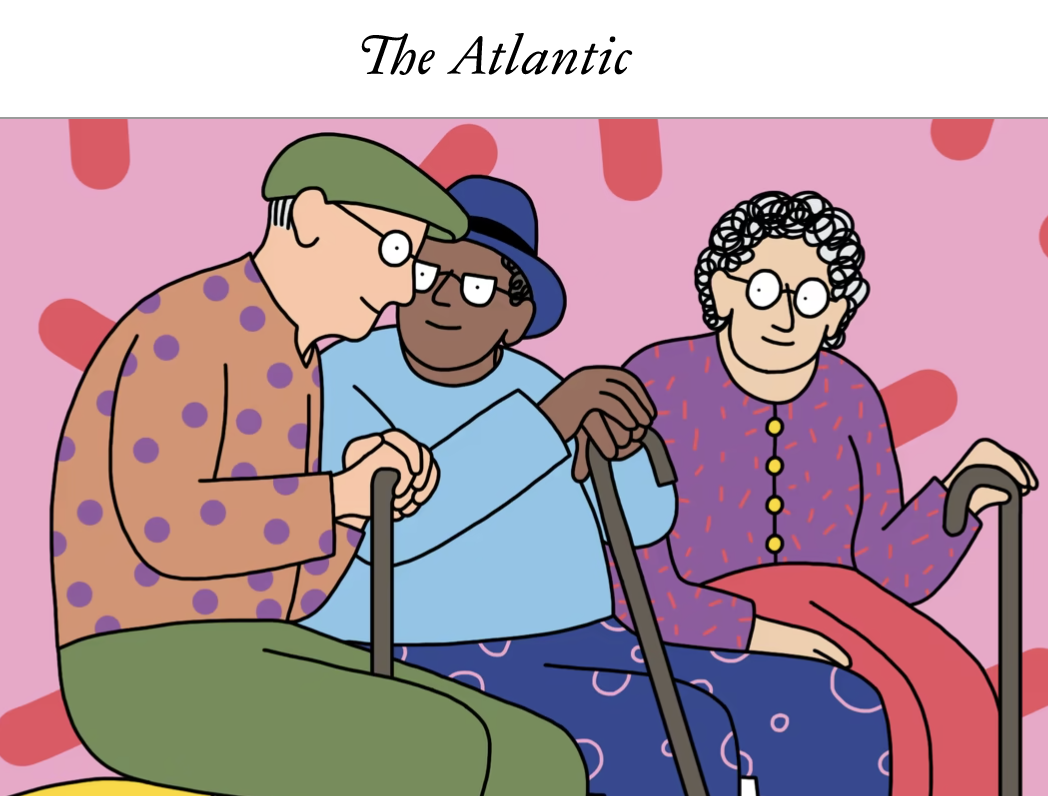 We love reading stories in major media outlets that confirm what we know at Lasell Village:  continuing an active lifestyle marked by continuing education, daily movement, and strong social connections are among the best ways to cultivate happiness as we age and face life’s inevitable bumps and losses.  Read The Atlantic article here! 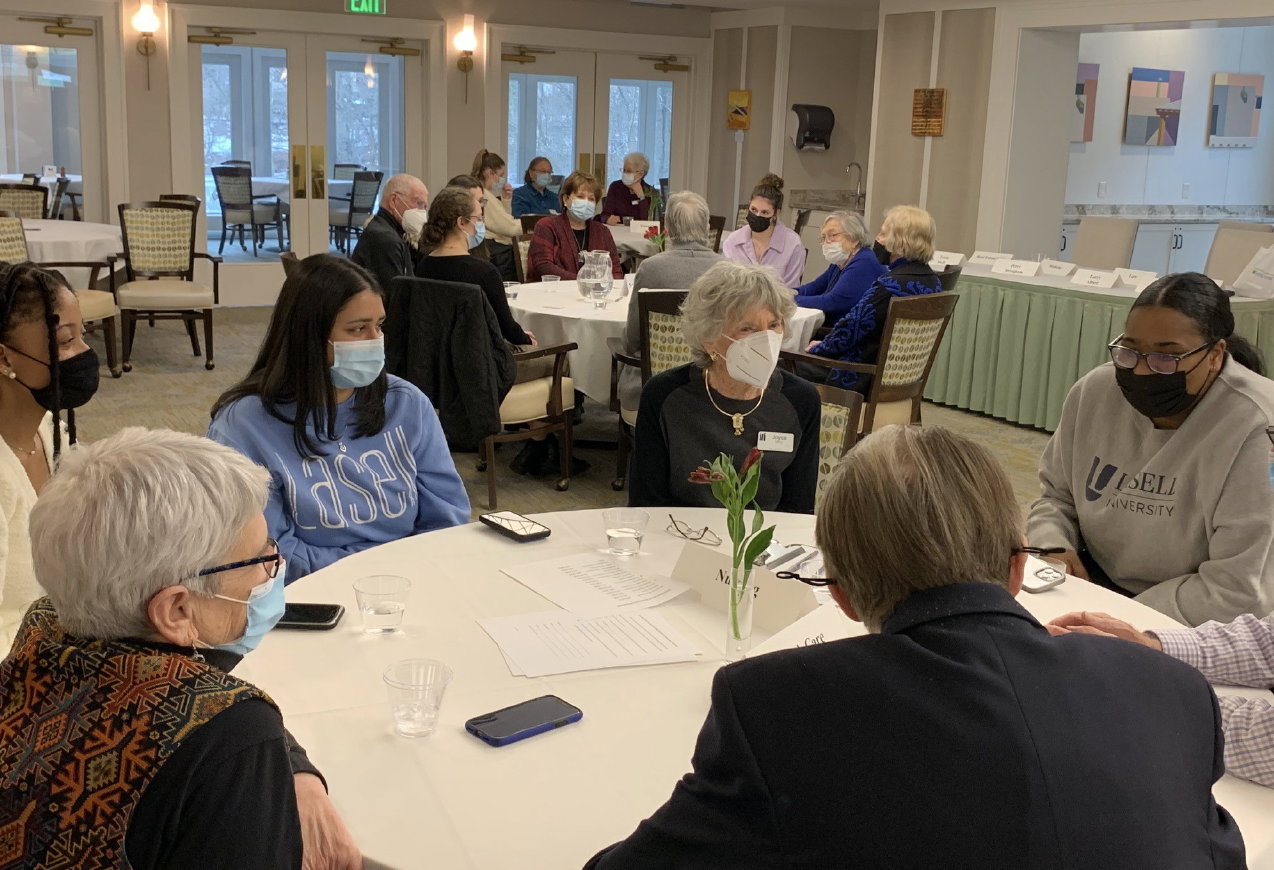 This idea was spawned by students and residents who are elected to the multigenerational Student Government Association at Lasell University.  As we resume in-person educational activities, the focus continues to be on maximizing the benefits of an intergenerational campus, learning and sharing perspectives across the lifespan. One that brought students from the University together with residents to share ideas, experience, and contacts about various careers that are connected to the majors at the University: law, medicine, education, technology, business and marketing.

The two hours passed quickly and ended with refreshments AND lots of planned future meetings between students and Village residents!

Thank you to everyone who helped make this event such a success.

President of Lasell Village, Anne Doyle, and President of Lasell University, Michael Alexander, were invited to participate in this prestigious invitation-only Educational Executive Leadership Institute at Yale School of Management, for the third year in a row. Anne was invited as the President of the only senior living organization on a university campus with an educational requirement for its residents. It was an exciting conversation with 100 university presidents, the CEO of Intel, and the CEO of Zoom, reimagining the future of education.

This new program highlights “intimate revelations about aging from diverse baby boomers.” Anne is featured as a guest expert in episodes 3 (airing in Boston January 23) and 12 (airing in Boston March 27), discussing opportunities to think differently about aging, including intergenerational living and learning.

For those outside of the Boston area, the series is running nationwide, and the list of other times and channels can be found  HERE:  STATION LIST.

For more information about the series and to view episode clips, visit www.gettingdotolder.com.

Thirty million readers opened their December 2021/January 2022 AARP magazine to find Lasell Village recognized in the article “Finding the Best Place For Your Retirement.”  The Village was highlighted among other innovative senior living models for our learning opportunities. Lasell Village continues to distinguish itself for its philosophy of lifelong learning. 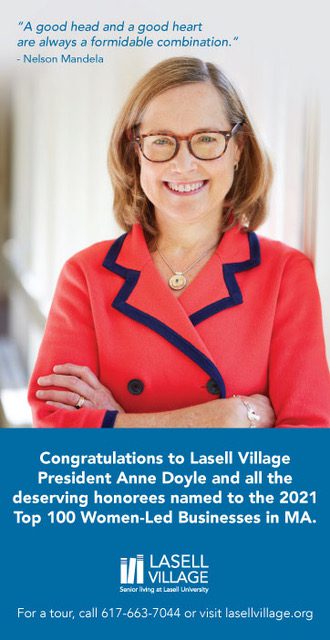 For more information about the awards and to see the full list of this year’s recipients, visit the Boston Globe or The Commonwealth Institute.

Last October, Lasell Village President Anne Doyle was invited to lead a panel on the future of aging in the United States for the 2021 World Ageing Festival based in Singapore and held virtually worldwide.  Experts from fourteen countries around the world were invited to present their perspectives on aging.

Anne Doyle provided context and facilitated a lively conversation with a panel of people well-positioned to provide perspectives on aging: Lasell Village residents, Sushi Gawande, Tricia Swift, and Charlotte Lindgren Winslow, and colleague Tim Driver, technology entrepreneur and President of the Age-Friendly Institute.  Simply stated, it was a fantastic event! 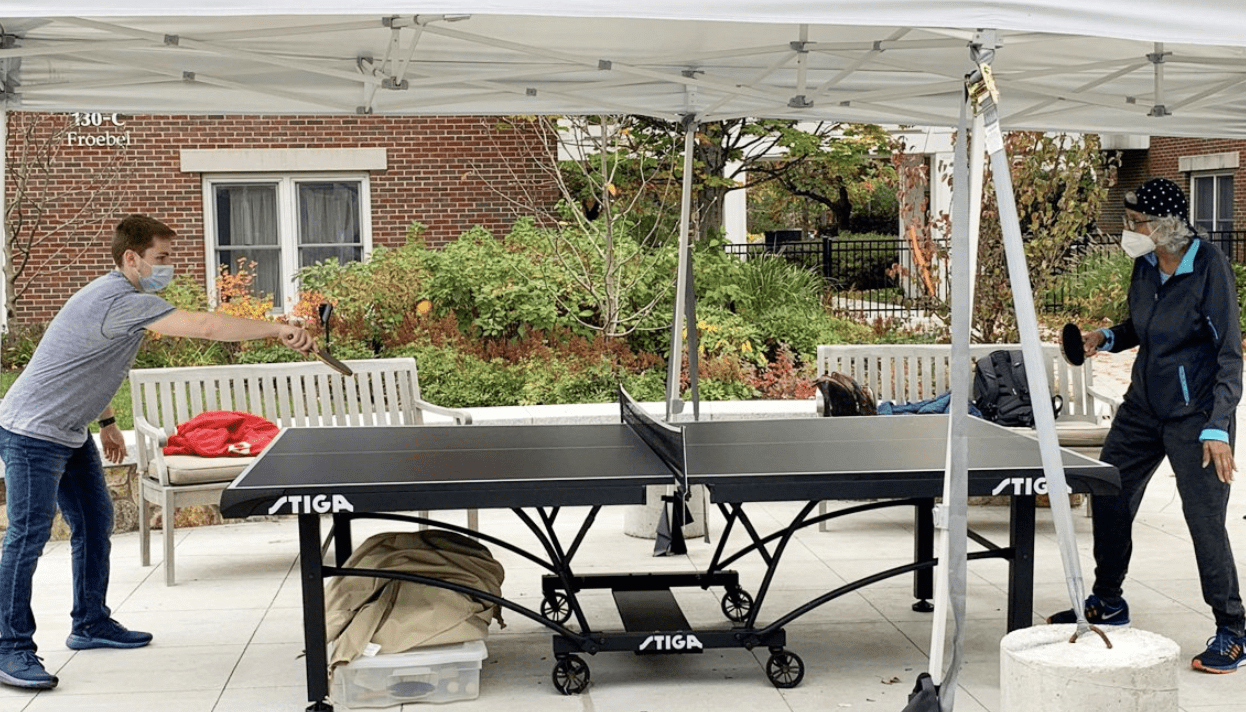 We are delighted to share the recent AARP article highlighting Lasell Village’s intergenerational model on a university campus. This article features the vibrancy of the campus community. Thank you to resident, Nelly Murstein, and Lasell University student and Village employee, Kelvyn Perez, for sharing your stories.  The fabulous ping pong photo also demonstrates what we know to be true: Connecting across generations IS a game changer!

This week, the Boston Globe featured an op-ed piece by several board members of the Age-Friendly Institute, where Village President Anne Doyle is also a board member.  The authors cite the multiple benefits to employers of recruiting and retaining older adults—for customers, for younger co-workers, and for the older adult employees themselves.  Lasell Village gets a shout-out as an example of a local employer with an age-friendly employment philosophy.  Read it here.

Interested in reading more?  Visit the news archive for a complete selection of news items dating back to 2018.